Toronto, Ontario - April 4, 2013 - Excellon Resources Inc. (TSX:EXN) ("Excellon" or "the Company"),Â Mexico's highest grade silver producer, is pleased to report results from the recently-completed fall and winter diamond drilling programs on the company's Beschefer and DeSantis properties, both located in the prolific Abitibi Greenstone Belt of Northeastern Ontario and Northwestern Quebec. The programs followed up on known mineralization as well as investigating previously untested geophysical anomalies and regional geological targets. Highlights of the drilling programs include:

John Sullivan, Vice-President of Exploration stated,Â "Our 2013 Canadian drilling programs validate the significant upside potential of both of these projects. The Beschefer results have extended the known B14 Zone mineralization and demonstrate the project's high-grade gold potential. At DeSantis, we have discovered new gold bearing alteration and stratigraphy immediately west of the heart of the century-old Timmins Gold camp. While Excellon's primary exploration focus remains on growing our La Platosa manto resource in Mexico, our Canadian team will assess these promising results over the coming months in preparation for future exploration programs."

Beschefer Program
The Beschefer property is located in northwestern Quebec 12 km east of the past-producing Selbaie mine and 80 km east-southeast of the recently commissioned Detour Gold Mine. The 2013 program consisted of 16 diamond drill holes totaling 6,668 m. The primary focus of this drilling was to follow up on results from the B-14 Zone, an intensely sheared and strongly sericite-, ankerite-, hematite-altered and sulphide-bearing deformation zone, which trends in a northeast-southwest direction across the property. Hole BE13-038 intersected the best result ever intersected on the project:Â 55.60 g/t Au (uncut) over 5.57 m (13.64 g/t Au cut to 34 g/t), including 224.0 g/t Au over 1.23 m.Â This hole tested the B14 Zone approximately 100 meters down dip from BE12-014, which returned 13.07 g/t Au (uncut) over 8.75 m (8.87 g/t cut to 34 g/t). BE13-035 tested the B-14 Zone approximately 250 meters along strike to the southwest of BE13-038, intersected the zone over a width of approximately 25 m and returned assays ofÂ 1.95 g/t Au over 17.85 m, including 3.08 g/t Au over 2.51 m.Â Based on these encouraging results additional holes BE13-042, 045, 046 and 047 were drilled as direct follow-ups. Assays for these holes are pending. Reported assays are found in the table below, along with a property plan map and two vertical sections highlighting holes BE13-035 and 038 respectively.

In addition to BE13-035, 038, 042, 045, 046 and 047, 10 other holes were drilled during the program. The B14 Zone was the target of 14 of the 16 holes drilled and the zone was encountered in all of them. The other two holes tested geophysical targets and encountered no significant mineralization. Assays have been received for eight of the holes with no significant gold values being encountered in three of them. Assays remain outstanding for the final eight holes.

DeSantis Program:
The DeSantis property is located 4.5 kilometres southwest of the City of Timmins, Ontario in the heart of the Timmins gold camp. The 2012/2013 diamond drilling program consisted of 18 holes totalling 6,686 m and had two objectives: first, to test the down-dip extension of the Albitite Zone and, second, to explore untested geophysical and geological targets elsewhere on the property.

The Albitite Zone drilling was initiated by deepening DS11-016B, which was drilled in 2011. The zone consists of a felsic intrusive that generally occurs within the footwall portion of ultramafic flows at or near the contact with mafic volcanics. Gold mineralization is associated with an increase in brecciation and sulphide mineralization. Though no significant mineralization or felsic intrusive was encountered at the ultramafic/mafic contact, the hole was continued and encountered a significant new hydrothermal alteration system approximately 300 m into the footwall below the contact at approximately 1,050 m vertical depth. The hydrothermal system consists of variably developed ankerite, sericite, albite alteration with quartz-tourmaline veins and sulphides dominated by pyrite. Sampling of this new zone returned assays ofÂ 0.51 g/t Au over 57.60 m, including 1.35 g/t Au over 6.15 m.Â To better understand the nature and extent of this "16B Zone" two wedge holes were drilled. DS11-016D tested the zone 80 meters above and 20 meters to the west of DS11-016B while DS11-016F intersected the zone 30 meters to the east. DS11-016D returned 0.73 g/t Au over 6.80 m, including 2.88 g/t Au over 0.65 m, while DS11-016F assayedÂ 2.16 g/t Au over 31.70 m, including 4.09 g/t Au over 7.20 m.Â These results indicate that the 16B Zone increases in grade and alteration intensity to the east. The zone is open in all directions and, most importantly, the up-dip extension of the zone has seen virtually no drilling between DS11-016 and surface.

Eight regional holes were drilled to test geophysical targets and the strike extension of the historic McEnaney veins located on the southeastern portion of the property, which saw two campaigns of underground exploration between 1911 and 1923. Of these holes DS13-007 encountered a sequence of hydrothermally-altered mafic volcanics located 450 m northwest of the DeSantis No. 2 shaft. The alteration consists of strong sericite, ankerite, local tourmaline and quartz-ankerite veins with gold associated with increased pyrite content. This zone is a near-surface occurrence, being intersected immediately below the overburden and extending for a down-hole length of approximately 70 m. The best assay from this zone was 2.68 g/t Au over 3.10 m. In addition holes DS13-011 and DS13-012 intersected a sequence of well mineralized and altered, pyritic and quartz-ankerite veined mafic volcanics that are interpreted to be the easterly strike extension of the McEnaney veins. Assays are pending for these two holes. Reported assays are found in the table below as are a property plan map, a schematic longitudinal section and a schematic vertical section depicting the 16B Zone as it relates to the historically known zones at DeSantis.

In addition to DS11-016D, DS11-016F, DS13-007, DS13-011 and DS13-012 there were 13 other holes drilled during the program. While these holes did not encounter significant mineralization, although some assays remain outstanding, they provided valuable geological data that will be useful for planning purposes going forward. 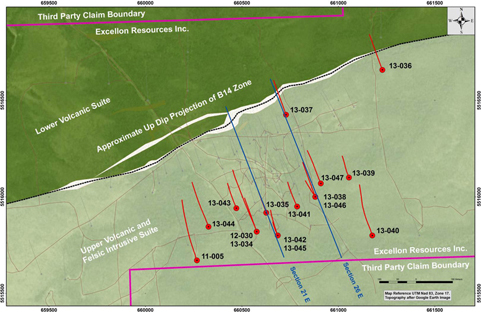 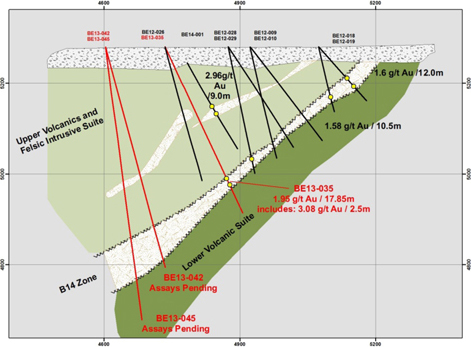 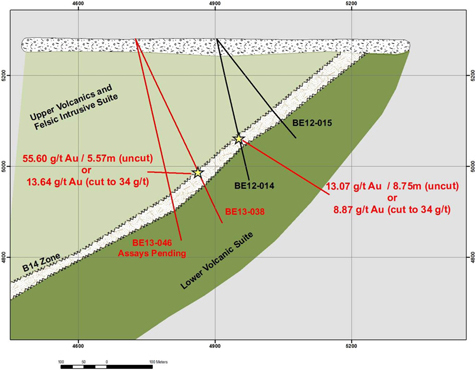 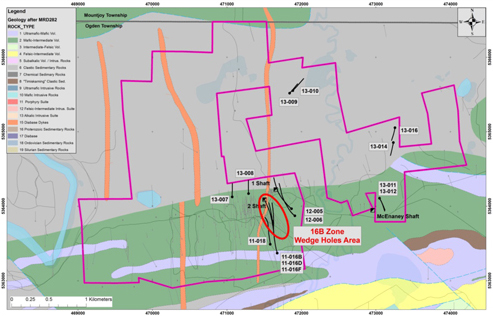 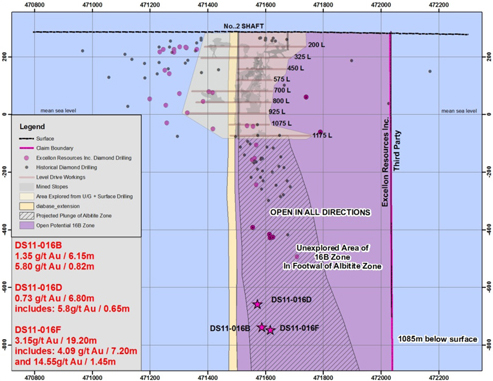 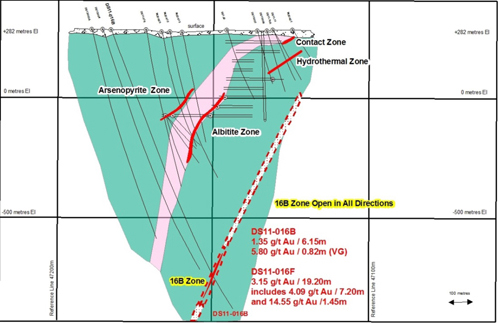 Quality Control
Excellon Resources has a comprehensive quality-control program in place for its Canadian projects to ensure best practice in the sampling and analysis of drill core. This program is managed by, Stephen Conquer one of the project Qualified Persons. Drill core samples are prepared and analyzed by ALS Minerals at either of its Vancouver, B.C. or Val d'Or, QC ISO/IEC 17025:2005 accredited laboratories.

About Excellon
An Evolution in High Grade Silver: Excellon's 100%-owned La Platosa Mine in Durango is Mexico's highest grade silver mine, with lead and zinc by-products making it one of the lowest cash cost silver mines in the country. The Company is positioning itself to capitalize on undervalued projects by focusing on increasing La Platosa's profitable silver production and near term mineable resources.