Toronto, Ontario -- January 17, 2013 -- Excellon Resources Inc. (TSX:EXN) ("Excellon" or "the Company"), Mexico's highest grade silver producer, is pleased to report results for diamond drill hole EX12LP1038, completed in late 2012 in the Rincon del Caido ("Rincon") area, less than one km northwest of the Platosa Mine. LP1038 encountered Source-style sulphide-mineralized skarn typical of the eight other significant intersections reported in the Rincon area since spring 2012. Each of these holes intersected skarn alteration and significant metal values, including persistent anomalous gold, indicating that Rincon lies on the edge of a proximal carbonate replacement deposit ("CRD"), the possible Source of the Platosa mantos. The Au values encountered in LP1038, however, are far higher than those encountered previously and suggest that the Source itself will contain a significant gold component.

"The high gold values encountered in hole LP1038 are a very exciting indicator of what we can expect when we discover the centre of the large CRD system we have been seeking since exploration began at Platosa," said John Sullivan, Vice-President of Exploration. "The presence of gold throughout the Rincon del Caido area suggests the Source may be auriferous, which is a characteristic of the nearby Ojuela Mine where over six million tonnes of 3-4 g/t gold ores, with high silver and lead grades were produced prior to the mine's closure in 1932. We look forward to continuing and accelerating the search during 2013."

In addition to the positive results in LP1038, LP1034 drilled immediately north of the Guadalupe Manto encountered two skarn intervals, one of 0.20 m and the other 2.50 m in width. The latter is magnetite rich and lies immediately above the marble-underlying granodiorite contact and indicates the presence of a Source environment almost immediately beneath the massive sulphide mantos, further supporting the likelihood that the sulphides at Rincon are related to the mantos. Holes LP1032B and LP1035 also had narrow to moderately wide mineralized-skarn intersections, some of which were rich in bismuth (Bi), and copper (Cu), all encouraging signs in a source environment. Assay details are found in the table below.

* All holes were drilled vertically and intervals are core widths. Mineralization banding lies at highly variable angles to core axes in all Rincon holes (as is typical of skarn-related sulphide mineralization) and data points remain sparse. Further geometric information is still required to estimate true thicknesses. 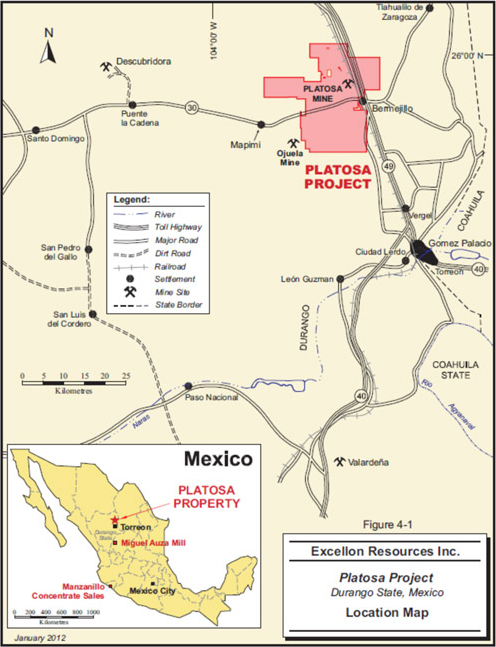 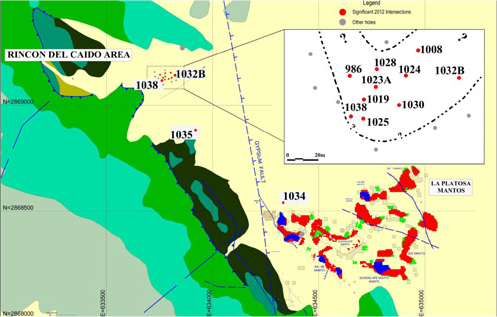 Platosa drill core samples are prepared and assayed by SGS Minerals Services in Durango, Mexico. The lab is accredited to ISO/IEC 17025. The Company has a comprehensive QAQC program, supervised by an independent Qualified Person.

Mr. Sullivan is an economic geologist with over 35 years of experience in the mineral industry. Prior to joining Excellon in 2007 he was a senior geologist at a Toronto-based international geological and mining engineering consulting firm where he evaluated properties and prepared NI 43-101 reports on gold and base metal projects in Canada and internationally. In addition he has held senior positions with two large Canadian mining companies where he directed major exploration programs, managed field offices, and evaluated projects in Canada, Europe, Africa and Latin America. Mr. Sullivan is not independent of Excellon as he is an officer of the Company.

Excellon's high-grade silver production drives transformative exploration potential. The Company's 100%-owned La Platosa Mine in Durango is Mexico's highest grade silver mine, with lead and zinc by-products making it one of the lowest cash cost silver mines in the country. With 41,000 hectares of exploration ground surrounding the mine, Excellon is focused on discovering the large-tonnage Source of the high-grade silver mantos currently in production. Such a discovery has the potential to transform La Platosa into the next major project in Mexico's prolific CRD/silver belt.