"We are excited to resume drilling at La Platosa,” stated John Sullivan, Vice President Exploration. “During the past year, we have re-examined the data generated during our recent drilling programs, particularly in respect of the Source-style discovery made in 2012. We will also shortly be commencing a seismic survey near current mining infrastructure which, if successful in direct detection of massive sulphides, may be a cost-effective way of discovering new high grade mantos."

Seismic surveying has recently become cost-competitive with more conventional geophysical methods and has played a key role in recent massive sulphide discoveries by Canadian companies in Spain and northern Manitoba. Seismic surveying uses acoustic waves to measure the characteristics of responses reflected back to surface from the rock units and structures encountered. The significant sound speed and density differences between massive sulphide manto mineralization and the sub-horizontal limestone unit in which it is hosted are expected to provide an ideal environment for successful seismic study. This method has the potential to significantly reduce exploration costs and expedite discovery by enhancing the Company’s understanding of sub-surface geology and outlining direct drilling targets.

The Company has engaged Olson Engineering, Inc. of Wheat Ridge, Colorado to undertake the initial 2D seismic reflection test survey over the high-grade Pierna and NE-1 mantos (Figure 1). Assuming successful identification of these known mantos, the Company intends to carry out 3D seismic surveys over underexplored areas elsewhere on the property.

A 10,000 metre diamond drill program has also been approved for the remainder of the year and commenced last week. Drilling will focus on (i) manto targets developed by the seismic survey and otherwise by Company geologists during recent months, and (ii) on the Rincon del Caido discovery made in 2012, one kilometre northwest of the La Platosa Mine (Figure 2). Significant potential remains for further new manto discoveries as the deposit is open to the north, northeast, east and southeast of the known mantos.

The Company believes that the Rincon discovery is on the edge of the Source of the Platosa carbonate replacement deposit system and may also be related to the Platosa mantos. To date, Excellon has drilled 13 significant intersections in the Rincon-Mantos corridor northwest of the La Platosa Mine, including:

John Sullivan, Vice-President Exploration, is responsible for the Company’s exploration programs and has supervised the preparation of the technical information, which is disclosed in this press release. He has acted as the Qualified Person, as defined in NI 43-101, for this disclosure.

Excellon’s 100%-owned and royalty free La Platosa Mine in Durango is Mexico’s highest grade silver mine, with lead and zinc by-products making it one of the lowest cash cost silver mines in the country. The Company is positioning itself to capitalize on undervalued projects by focusing on increasing La Platosa’s profitable silver production and near-term mineable resources.

Additional details on the La Platosa Mine and the rest of Excellon’s exploration properties are available atÂ www.excellonresources.com.

The Toronto Stock Exchange has not reviewed and does not accept responsibility for the adequacy or accuracy of the content of this Press Release, which has been prepared by management. This press release contains forward-looking statements within the meaning of Section 27A of the Securities Act and Section 27E of the Exchange Act. Such statements include, without limitation, statements regarding the future results of operations, performance and achievements of the Company, including potential property acquisitions, the timing, content, cost and results of proposed work programs, the discovery and delineation of mineral deposits/resources/reserves, geological interpretations, proposed production rates, potential mineral recovery processes and rates, business and financing plans, business trends and future operating revenues. Although the Company believes that such statements are reasonable, it can give no assurance that such expectations will prove to be correct. Forward-looking statements are typically identified by words such as: believe, expect, anticipate, intend, estimate, postulate and similar expressions, or are those, which, by their nature, refer to future events. The Company cautions investors that any forward-looking statements by the Company are not guarantees of future results or performance, and that actual results may differ materially from those in forward looking statements as a result of various factors, including, but not limited to, variations in the nature, quality and quantity of any mineral deposits that may be located, significant downward variations in the market price of any minerals produced [particularly silver], the Company's inability to obtain any necessary permits, consents or authorizations required for its activities, to produce minerals from its properties successfully or profitably, to continue its projected growth, to raise the necessary capital or to be fully able to implement its business strategies. All of the Company's public disclosure filings may be accessed via www.sedar.com and readers are urged to review these materials, including the technical reports filed with respect to the Company's mineral properties, and particularly the March 25, 2014 NI 43-101-compliant technical report prepared by Roscoe Postle Associates Inc. with respect to the Platosa Property. This press release is not, and is not to be construed in any way as, an offer to buy or sell securities in the United States. 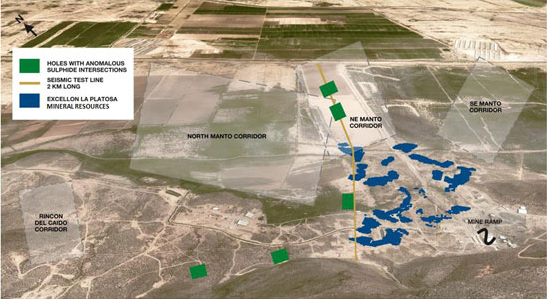