Toronto, Ontario – April 13, 2012 - Excellon Resources Inc. (TSX:EXN) ("Excellon" or "the Company") Mexico’s highest grade silver producer, is pleased to report assay results for seven new drill holes.  Of the seven holes, six were directed to the search for additional massive sulphide manto mineralization.  Five were drilled west of the northwest corner of the 6A Manto and one was drilled immediately north of the northwest extremity of the Guadalupe Manto.  The seventh was drilled in the Rincón del Caído area 1.0 km northwest of the La Platosa Mine to further the search for the large-tonnage proximal source of the massive sulphide mantos.

John Sullivan, Vice President of Exploration, Mexico states; “We believe that the Platosa manto holes will contribute additional tonnage to the Mineral Resource in the future.  They are also important due to their proximity to existing underground infrastructure and will be worked into the short-medium term mining plan.”  He further added; “In addition we are very encouraged by the intersection in hole LP986.  It again demonstrates that the Rincón del Caído area holds considerable discovery potential and validates our strategy as we continue to develop exploration targets for the source of the high-grade Platosa mantos.”

Mexican Exploration Update:
Assay details for the seven holes are shown in the table below.  Locations for the six manto holes are shown on Map 2.  The Rincón del Caído area with holes LP986 and LP763, drilled in 2010, is shown on Map 3.  All intervals are estimated true thicknesses.  In addition to these seven holes there have been 19 other holes, including one which was abandoned because of technical difficulties, drilled at Platosa since the exploration press release dated December 2, 2011.  While some of these 19 holes encountered sulphides, none intersected metal values of significance.

Two drills are currently operating at Platosa.  One continues the search for additional carbonate replacement deposit (“CRD”) massive sulphide mantos.  The other targets the large-tonnage proximal source of these mantos (“the Source”).

With respect to other priorities, a Natural Source Audio Magnetotelluric (“NSAMT”) ground geophysical survey over selected portions of the Platosa Property is to begin before the end of April. 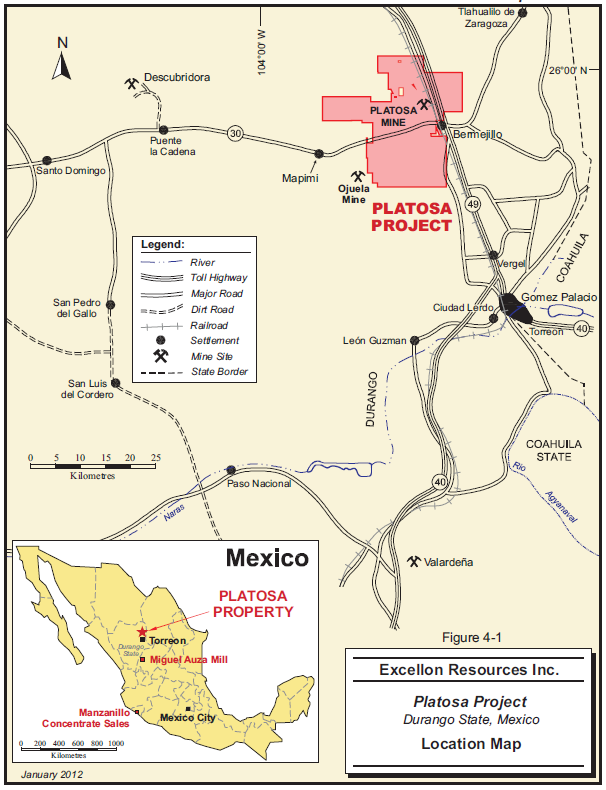 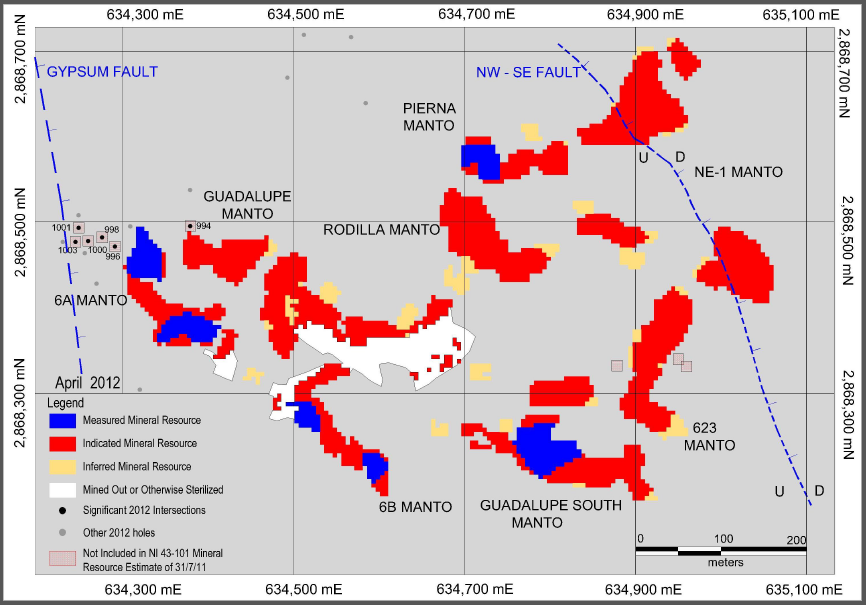 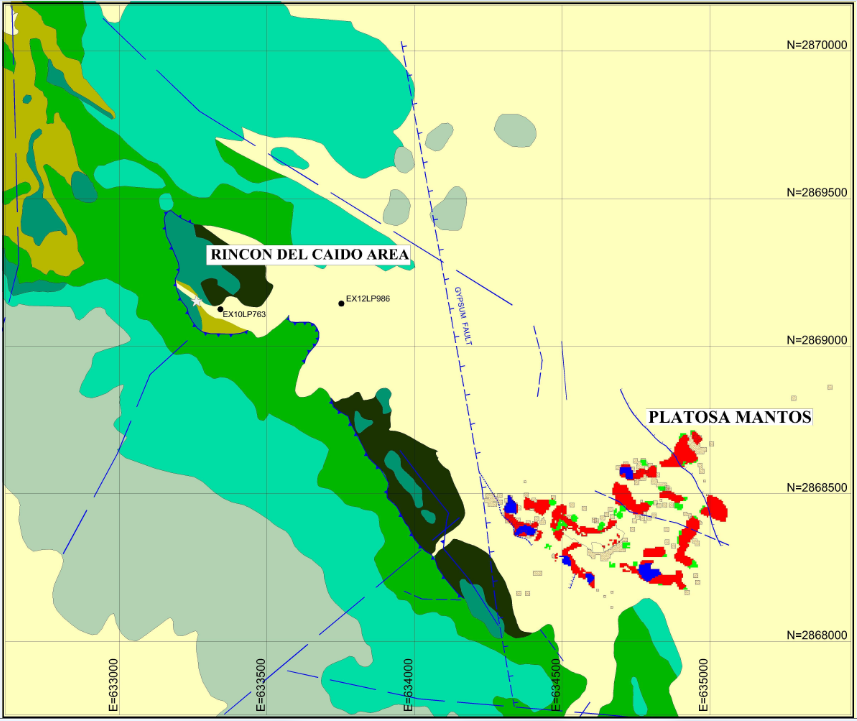 Mexican drill core samples are prepared and assayed by SGS Minerals Services (“SGS”) in Durango, Mexico.  The lab is accredited to ISO/IEC 17025.  The Company has a comprehensive QAQC program, supervised by an independent Qualified Person.

Qualified Person
Mr. John Sullivan, BSc., PGeo., Excellon’s Vice President of Exploration for Mexico has acted as the Qualified Person, as defined in NI 43-101, for this disclosure.

Mr. Sullivan is an economic geologist with over 35 years of experience in the mineral industry.  Prior to joining Excellon in 2007 he was a senior geologist at a Toronto-based international geological and mining engineering consulting firm where he evaluated properties and prepared NI 43-101 reports on gold and base metal projects in Canada and internationally.  In addition he has held senior positions with two large Canadian mining companies where he directed major exploration programs, managed field offices, and evaluated projects in Canada, Europe, Africa and Latin America.  Mr. Sullivan is not independent of Excellon as he is an officer of the Company.

About Excellon
Excellon, a mineral resource company operating in Durango and Zacatecas States, Mexico, and Ontario and Quebec, Canada, is committed to building value through production, expansion and discovery.  Excellon is Mexico’s highest-grade silver producer; it produces silver, lead and zinc from the high-grade manto Mineral Resource on its large, 100% owned Platosa Property, strategically located in the middle of the Mexican CRD/silver belt. Excellon's focus is on expanding its operating capacity and increasing its Mineral Resources at Platosa where an exploration program focused on diamond drilling and advanced geophysical techniques is ongoing. The Platosa Property, not fully explored, has several geological indicators of a large mineralized system.  The Miguel Auza Mill Operation in Zacatecas also has 41,000 hectares of underexplored land.  Excellon also has ongoing gold exploration programs on the DeSantis Project, located near Timmins, Ontario and the Beschefer Project, located in northwestern Quebec.  Both these projects host gold mineralization and significant potential for the discovery of more.  Excellon will continue to use cash from operations to fund its ongoing exploration activities.

The Toronto Stock Exchange has not reviewed and does not accept responsibility for the adequacy or accuracy of the content of this Press Release, which has been prepared by management. This press release contains forward-looking statements within the meaning of Section 27A of the Securities Act and Section 27E of the Exchange Act. Such statements include, without limitation, statements regarding the future results of operations, performance and achievements of the Company, including potential property acquisitions, the timing, content, cost and results of proposed work programs, the discovery and delineation of mineral deposits/resources/reserves, geological interpretations, proposed production rates, potential mineral recovery processes and rates, business and financing plans, business trends and future operating revenues. Although the Company believes that such statements are reasonable, it can give no assurance that such expectations will prove to be correct. Forward-looking statements are typically identified by words such as: believe, expect, anticipate, intend, estimate, postulate and similar expressions, or are those, which, by their nature, refer to future events. The Company cautions investors that any forward-looking statements by the Company are not guarantees of future results or performance, and that actual results may differ materially from those in forward looking statements as a result of various factors, including, but not limited to, variations in the nature, quality and quantity of any mineral deposits that may be located, significant downward variations in the market price of any minerals produced [particularly silver], the Company's inability to obtain any necessary permits, consents or authorizations required for its activities, to produce minerals from its properties successfully or profitably, to continue its projected growth, to raise the necessary capital or to be fully able to implement its business strategies. All of the Company's public disclosure filings may be accessed via www.sedar.com and readers are urged to review these materials, including the technical reports filed with respect to the Company's mineral properties, and particularly the November 22, 2011 NI 43-101-compliant technical report prepared by Roscoe Postle Associates Inc. with respect to the Platosa Property. This press release is not, and is not to be construed in any way as, an offer to buy or sell securities in the United States.